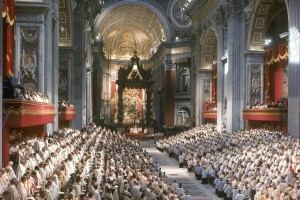 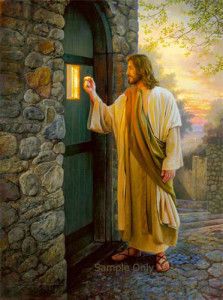 At the writing of this post, Pope Francis fifty years after Vatican II, is demonstrating to the present global community an authentic, concrete example of the pastoral focus that Pope John 23rd had hoped to generate through the council. How could the Catholic Church (CC) bring to a modern, educated world the disturbing presence of Jesus the Christ and his message: that the creator God is his father and wants all other members of the human family to be his brothers working together to make a heaven on earth? The council was organized to set the stage for a badly needed pastoral strategy without touching doctrinal underpinnings.

Pope Francis is discovering how difficult this charge can be. He has to bypass someway the conservative leftovers from pre-Vatican II and their followers whose spiritual life has been nurtured in the lethargic comfort of infallible guidance and certitude (See link: Vat.I).). They are allied with a resourceful group of upper level Church leadership appointed during the last 35 years by conservative popes unable or unwilling to see the signs of the times. The term “schism” for the first time is occurring in the media coverage of Francis’ reform activity as he pursues the wish of the last papal consistory. An additional comment, Francis’ pastoral approach inspired by a return to the Jesus of the gospels has caught the media’s global instantaneous and continuous attention as an attraction to millions eager to participate in the discussion. On this same front, Francis appears to have been embraced as a global moral leader by the international community in general and in particular by non-Catholic and even non- Christian religious belief systems.

Vatican II was convoked in the 1960’s when the world was under a menacing threat of nuclear war. The CC as a major moral beacon in the world was forced to stage a long awaited and needed presence. The 2500 plus CC bishops faced the challenge laid down by John 23rd: how to break through the doors of the ivory tower from which the Roman leadership, now infallible, had been issuing incomprehensible commands with  eternal threats to its growing global flock(See link: Vat.I).

The CC was rapidly losing its touch with the world it was sent to save. Pope John together with the bishops was able to assemble at the Council a team of experts many if not most of whom for their research and findings had been censured previously by Rome. They were selected to advise and instruct council fathers as necessary in formulating paths of reform within the restrictive commission of pastoral updating. Fortunately, many of the most outstanding talents of the CC had accessed and accepted much of the historical, cultural and linguistic research methodology and analyses laboriously crafted in the previous one to two hundred years by unhindered Protestant and Jewish and less scrupulous Catholic scholarship. Though still under close Vatican scrutiny modern scriptural analysis had been opened to Catholic specialists some twenty years (1943) prior to the Council, thus beginning a return of the CC to its biblical origins. The Council restored the Scriptures for the most part unavailable for centuries to lay readers thereby opening a fresh page in CC spirituality at the same time that the laity was finally acknowledged by reason of baptism to be full members of the Church.

On the same time the bureaucratic minority continued in control of ecclesiastical administration and abetted by conservative but well organized forces to this day have been able to delay critical changes required for implementing a successful evangelical strategy. Key decentralization of church government, though being promoted by Pope Francis, is still on hold. Updating the outdated magisterium awaits a long needed overhaul. Women who count as more than 50% of the human race still remain second class citizens in their father’s kingdom. Although in the Western world many of the laity have become of age in terms of a deeper theological outlook on spirituality, the Roman bureaucracy has opposed or paid scant attention to new spiritual perspectives. Finally, a shift in focus on the European and Western Christian churches to a universal mission has yet to take place.

Francis’ papacy is well into its third year when it has become clear that The Francis Effect (Link:    )has enjoyed much more popularity with both international secular and religious communities than with the official church leadership in the Vatican he was supposedly elected to reform. In a post to follow we will attempt to relate Francis’ public adoption of many Vatican II accomplishments in its spirit with implications for new ways of being church.

I am a practicing Catholic, Jesuit trained, Vatican II amateur theologian, popularizing a complex belief theme for a larger reading public. I have found great spiritual joy in the biblical and historical experts’ recovery of the long lost vision of Jesus’ passion for the Father’s commitment to his created world. This passion of Jesus is embraced in the universal Prayer, THE OUR FATHER. In recent years I have been inspired by the re-discovered spiritual approach to our God in the Ecumenical Council Vatican II.As an additional note I have enjoyed more than forty years of academic and practical experience dedicated to social, economic and political development in the poorer countries of Central and South America. Except for development work I am not a professional in any field, but have lived long enough to earn Licenciates in Philosophy and Theology as well as Masters degrees in Medieval History and Urban Planning, and an ABD (all but dissertation) in Economic and Social Development. View all posts by jackfisher